Land managers and researchers started patch burn grazing independently from each other when trying to solve the dilemma of how to perform prescribed fires without deferring grazing. Since the first paper was written on this topic in 1964 over 130 research articles have been published on its effects on livestock production, wildlife, plant diversity, soils, water and other ecological concerns in North America. Patch burn grazing uses grazing that is driven by fire, called pyric herbivory. We now know that this fire-grazing interaction is common with many wildlife species. It was and still is critical to the ecological structure, function, and organisms of not only North America but also Africa, Asia and Australia.

What is patch burn grazing?

The basic idea is that a portion of a pasture is burned using prescribed fire, the subsequent regrowth of plants attracts livestock to voluntarily concentrate their use on the recently burned area (called pyric herbivory) and other portions of the pasture receive rest from grazing. Another area of the pasture is then burned moving livestock use around the pasture and creating diversity in livestock forage resources, plant species, and wildlife habitat.

Here are some of the ecological and livestock production benefits to this management practice.

Patch burn grazing increases the species diversity and structural variability across the pasture when compared to traditionally managed pastures. In patches recently burned the concentrated grazing use suppresses large dominating perennial grasses which allows a greater abundance and diversity of broadleaf plants to grow. Patches differ in plant species that are most prevalent. In freshly burned patches sedges and grasses dominate. Broadleaf plants are common 1-2 year after fire and perennial grasses and shrubs are most prolific 2-3 years after fire. This increased variability in growth stage, structure and diversity provides habitat for a greater number of wildlife species. Creating heterogeneity between patches can be difficult when pastures are overgrazing prior to burning, when exotic plant species dominate, and when stocking rates are too heavy to allow unburned areas rest from use. 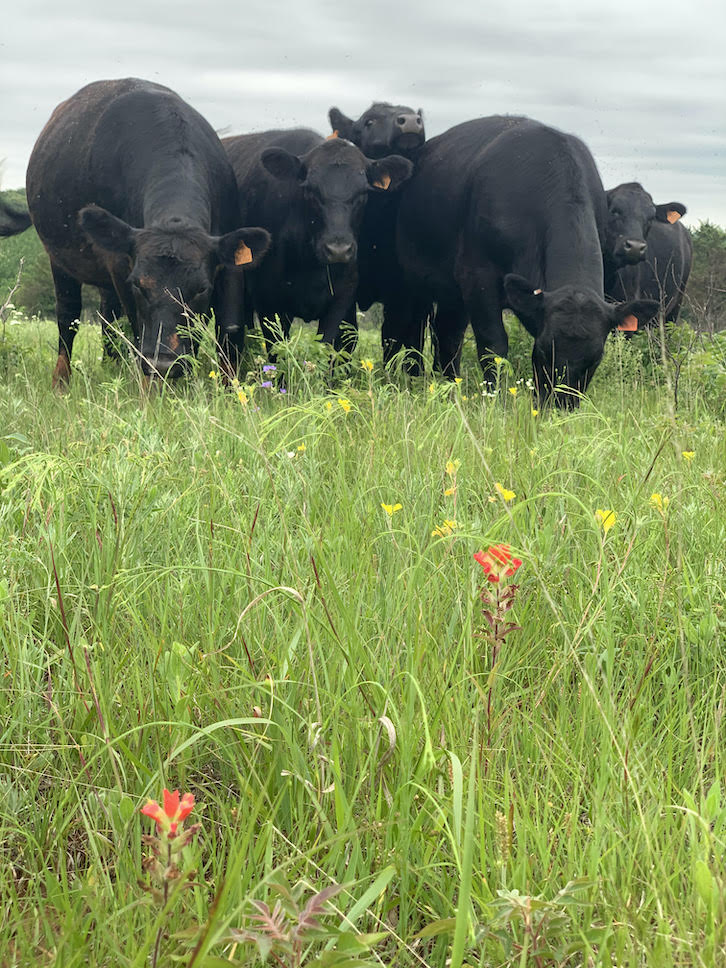 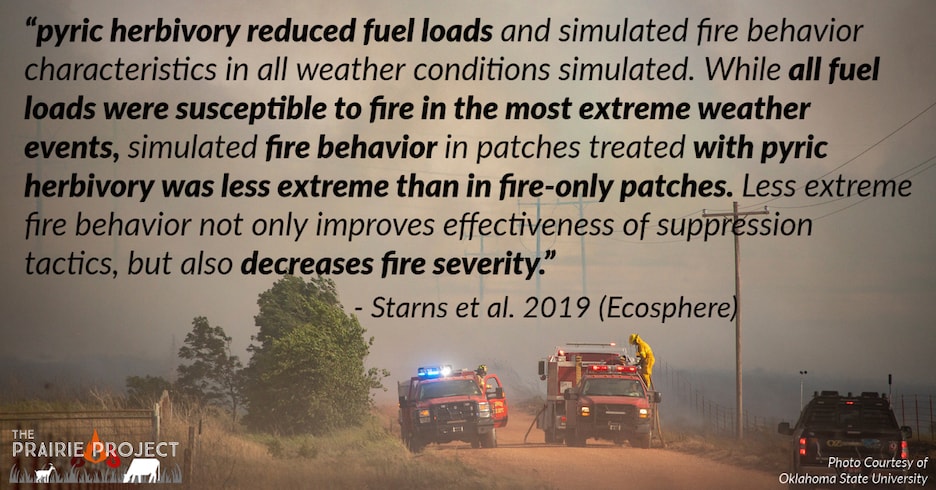 Although prescribed fire cannot prevent wildfires from starting, when combined with grazing, as in patch burn grazing, it can change fire behavior.

When prescribed fire alone is compared to patch burn grazing, the later reduced fuel loads, flame lengths, and the rate at which the fire spread to a greater degree and for a longer period of time. These reductions increased how long standard firefighting techniques could be used effectively (Starns el al. 2019).

Patch burn grazing provides diverse habitat for more wildlife species and a variety of habitat for individual species. The greater variability in plant species and plant structure created by patch burn grazing provides food and cover for wildlife species that require very different types of habitat. Recently burned areas have the required bare ground and short vegetation that is needed by species like killdeer and upland sandpiper while taller, thicker vegetation is available for Henslow’s sparrows in the patches with the greatest time since fire.

Grassland bird species that researchers have found benefit from patch burn grazing include:

Mammals that researchers have found benefit from patch burn grazing include: 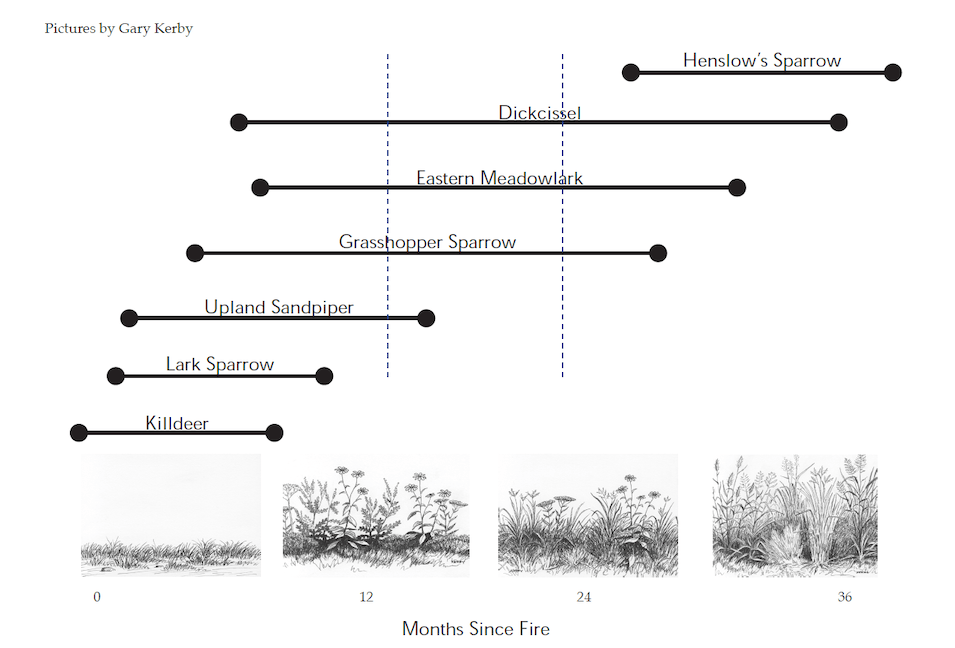 Prescribed fire removes old dead standing plant growth from the previous years that is low quality and coarse. The regrowth after fire is highly digestible and very palatable across the patch decreasing the selectivity of only palatable species. 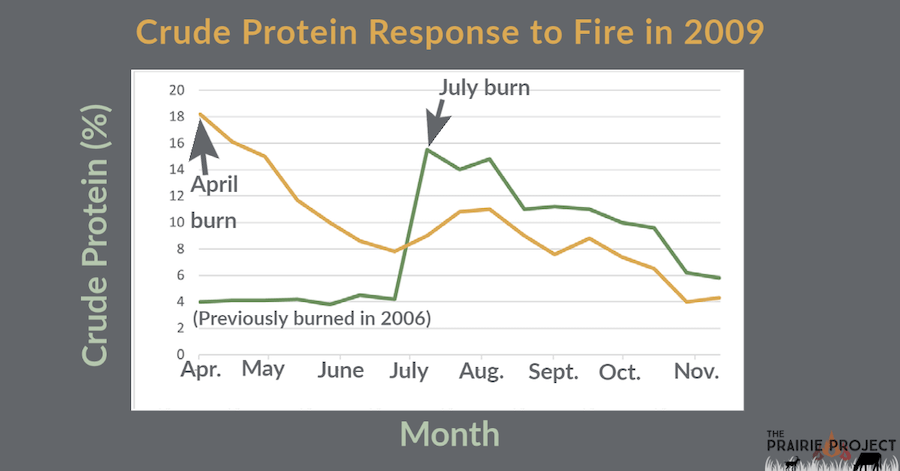 Forage quality is the highest the first 150 days following fire. By burning more than once a year, cow-calf operations can provide high quality forage for a greatest proportion of the year (Allred et al. 2011). When July or August burns were conducted on research pastures in Oklahoma, managers were able to delay winter protein supplementation from Nov. 1st until January 1st, with no reduction in cow or calf performance, because of the high quality forage available on the burned areas (Weir et al. 2013).

An 11-year study in western Oklahoma compared stocker performance in patch burned pastures versus traditionally managed pastures.  Researchers found that from 1999-2001 there was no statistical difference in stocker weight gains in the traditionally versus patch burn pastures. Then in 2002 the stockers in the patch burn pastures started gaining more weight and continued to gain more weight through the end of the study in 2009 (Limb et al. 2011). By 2002 the full rotation of burning had been completed in all patches and the full benefits from patch burning were captured by the grazing steers. 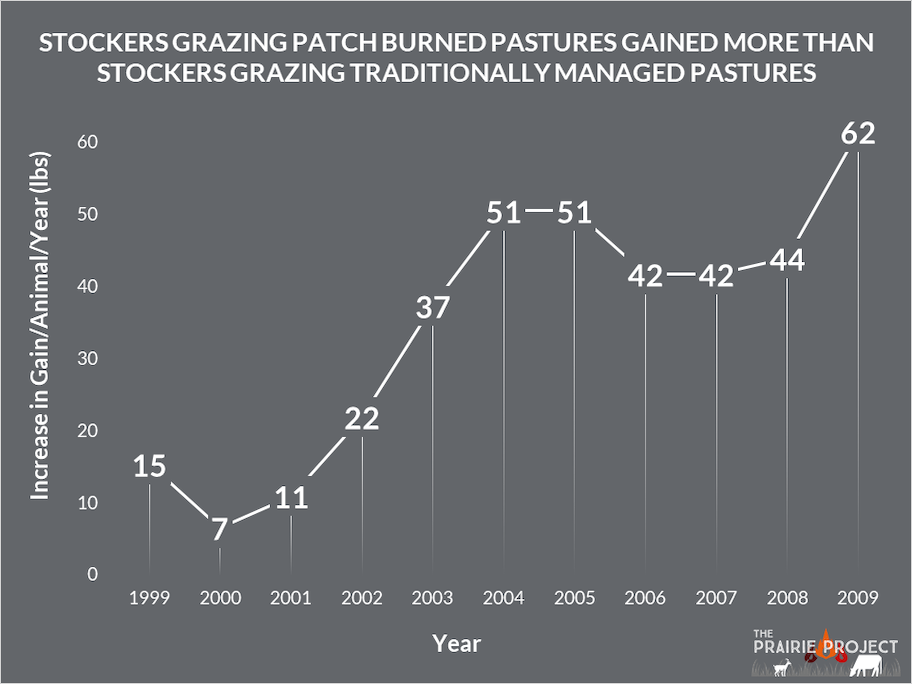 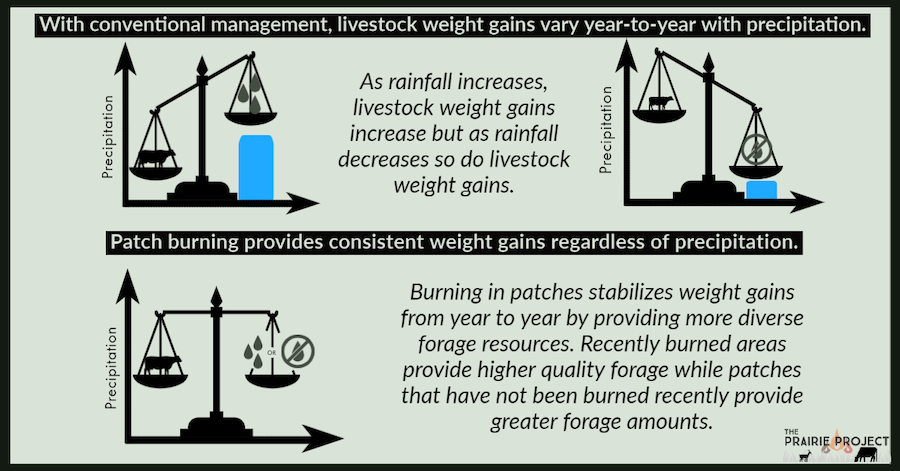 Under conventional management, livestock weight gains fluctuate between years, increasing when rainfall is high and decreasing when rainfall is low. With patch burn grazing, livestock weight gains are stabilized between years since cattle have access to areas with forage growth from both the current year as well as previous years. Recently burned areas are preferentially grazed allowing other areas to rest and stockpile forage for use during drought or for future burns. Greater diversity in forage resources are created with high quality forage in the recently burned patch and high quantities of forage in the patches with greater time since fire (Allred et al. 2014).

Patch burn grazing attracts cattle to recent burned patches because of the highly palatable regrowth after fire.  Steers tracked with GPS collars spent 70% of their time in the rently burned patch from April through September while steers in the annually burned pasture had more uniform use of the pasture (West et al. 2016). This preferential grazing of the current years burned patch allows the unburned patches rest from grazing until they are burned in 1-2 years. 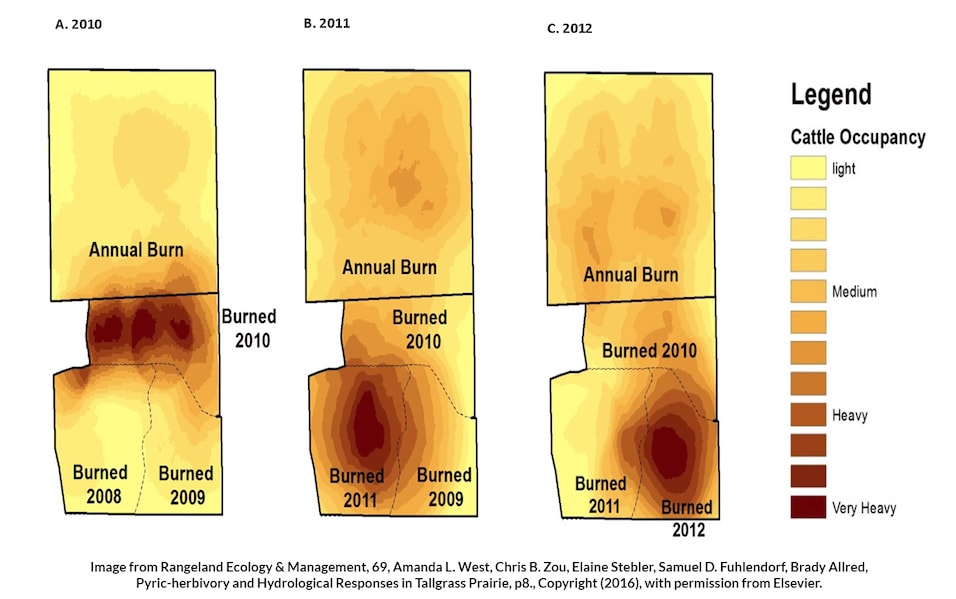 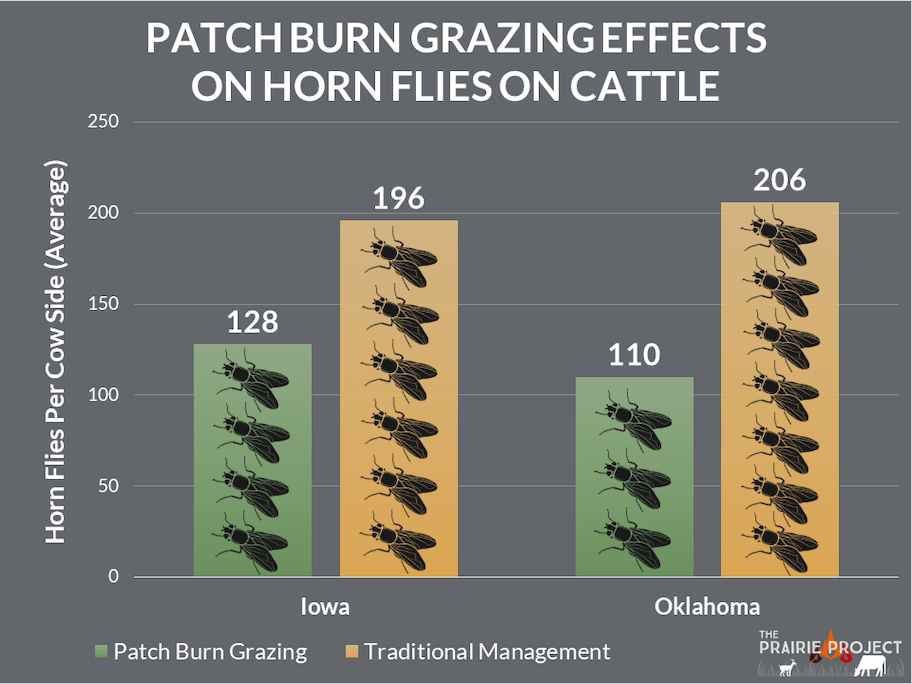 Horn flies can increase stress, decrease grazing and reduce weight gains in livestock and while insecticides are the primary control method used, horn flies can develop resistance to these chemicals over time.

In patch-burn grazed pastures, there was a 41% reduction in horn flies on cattle when compared to traditionally managed pastures (unburned with access to entire pasture) in Oklahoma and Iowa. Unlike the traditionally managed pastures, horn flies numbers in patch burned pastures were near the economic threshold for treatment (200 flies per cow) and below the behavioral threshold when stress increases and grazing time decreases (300 flies per cow) (Scasta et al. 2012)